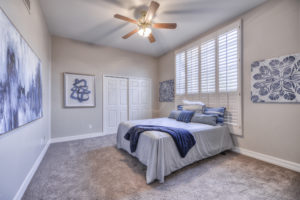 While homelessness may not be viewed as a looming issue on the horizon for those who are financially stable, or otherwise have secure and stable housing—it’s not as distant as some might think. With rents rising faster than wages, the burden of affording rent is looming larger and larger for many Americans, and in some cases becoming insurmountable.

According to the Zillow Group Report on Consumer Housing Trends 2017, 79 percent of renters who moved in the last 12 months experienced an increase in their monthly rent before moving to a new place. And over half (57 percent) said that hike was a factor in pushing them out the door and into another rental. Only 21 percent of renter households didn’t report experiencing an increase in rent.

Nearly a third (30 percent) of households nationwide, representing roughly 73 million adults, report they’re struggling or just getting by financially. And it’s no wonder; Americans spend on average a median of 29.1 percent of their income on rent, including many who spend a higher percentage but have lower incomes. Increasingly, major metro areas are becoming out of reach for those who aren’t earning more than minimum wage, and this is becoming increasingly true even in markets that have historically been more affordable.

With such large percentages of household incomes going towards rent, saving for the future is less of a priority—and possibility. More than half (51 percent) of Americans say they don’t have enough money saved to support themselves for 3 months, according to the Federal Reserve Board’s 2016 Survey of Household Economics and Decisionmaking.

According to the Zillow Group Report on Consumer Housing Trends 2017, today’s median household income for renters is $37,500, which equates to about $18 per hour—or 2.5 times the federal minimum wage of $7.25. Nationwide, in 2016, 2.2 million people lived off wages at or below the federal minimum wage, according to the U.S. Bureau of Labor Statistics.

When it comes to renting, there is no state where a 40-hour minimum wage is enough to afford a two-bedroom apartment, according to the National Low Income Housing Coalition.

While renting is becoming increasingly more difficult, buying a home becomes a distant dream.“Honestly, if you’re making $37,500 per year and have no savings, it’s probably not feasible for you to buy in most markets,” Zillow Chief Economist Dr. Svenja Gudell says.

Across all states, the median renter can expect to pay $1,430 per month on rent. It’s no wonder many Americans are struggling financially— particularly in New York, Los Angeles, Washington D.C., and Seattle, where there’s also a stronger relationship between rising rents and an increase in the homeless population.

Homelessness by the Numbers

Coast to coast, there are an estimated 550,000 homeless people, according to the U.S. Department of Urban and Housing Development. But Zillow Research used statistical modeling to estimate the uncounted homeless population, unsheltered homeless people often missed during the One Night Counts, to estimate the true number of homeless people, a number much higher than the official estimates. And as rents climb, the numbers will only grow, especially in large, tight metros, where the rent burden can become life-altering.

Take New York City, for example. The metro has the largest population of homeless people than anywhere else in the nation. Last year, there were an estimated 76,411 people experiencing homelessness, according to Zillow’s estimates. If rents were to rise 5 percent, an additional 2,982 people would be forced to the streets.

And Los Angeles doesn’t fare much better. Given the same rent hike, an additional 1,993 people would fall into homelessness. And a rent hike of 5 percent isn’t implausible, especially given that in L.A., rents rose 4.4 percent over the past year.

The Geography of Social Mobility

Right now, in L.A., renters dish out $2,707 per month for the median rent, which is almost twice the national median rent and amounts to nearly half of the median household income in the metro. With such a substantial chunk of money spent every month on rent, it’s no surprise the metro has an estimated 59,508 people without a home.

But rents haven’t always been so unaffordable. Just 17 years ago, three of the top 20 metros were rent-burdened, meaning renters paid more than 30 percent of their income on living expenses. Today, however, the number of cities that have become unaffordable have grown exponentially.

Currently, renters in 9 of the same top 20 metros can expect to spend 30 percent or more of their income on rent. The biggest share spent on rent comes from Los Angeles, where renters dish out nearly half (49 percent) of income on rent.

“The places where social mobility—the ability to climb the income ladder—is the greatest are now in places that are unaffordable for most people,” said Gudell. “San Jose or the Bay Area in general, parts of Boston, for example—these places have gotten to be so expensive that a lot of people who have an income of $37,500 a year will not be able to buy a home or even afford a family-sized rental.”

The Costs of Housing Instability Go Beyond Financial

Unfortunately, for too many, lack of affordable housing can complicate other critical aspects of life, including health and future livelihoods.

Individuals living in shelters are more than twice as likely to have a disability compared to the general population. This includes serious mental illnesses, conditions related to chronic substance abuse, diabetes, heart disease and HIV/AIDS, according to the U.S. Department of Housing and Urban Development.

Gudell says people have better outcomes when they aren’t constantly moving from place to place. “It’s been shown that you have better outcomes if you live in a stable environment with less frequent moves, which is easier to attain when you own versus renting,” Gudell said. “So, if you take stable environments away from people, their outcomes will most likely be worse than they are today, and that has an impact on education, on health and on income growth in the future.”