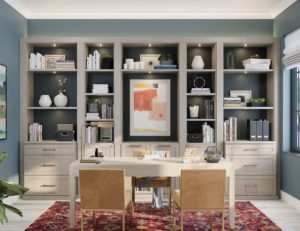 A new study found that women have a hard time concentrating in a chilly workplace. Their male colleagues, on the other hand, perform better in colder offices.

Scientists have previously determined that office temperatures are often set lower than necessary in the warmer months—and that women, in particular, could be affected. But new research has added more evidence to the reality that bringing in a jacket or a cozy blanket in the middle of July doesn’t always keep you warm enough to feel comfortable during the workday. According to a new study published in the journal Plos One, women were able to perform better on common cognitive tests in room temperatures that averaged closer to the actual temperatures outside the office.

Researchers behind the study had more than 540 college students in Berlin sit through different tests in a room that was set to various temperatures, with a range between 61 degrees and 91 degrees Fahrenheit. Participants in each scenario were asked to answer common logic problems and math questions that involved two-digit addition problems that were to be completed without a calculator. They were also asked to unscramble a combination of letters to form as many German words as they could.

The study found that warmer temperatures enabled women to answer more questions on the math and verbal tests, and also increased their accuracy on these tests overall. Overall, a temperature increase of just one Celsius degree was associated with a two percent increase in the number of math problems the women in the study correctly answered; it also correlated to a one percent increase in the performance on a verbal task.

What about the men in the room, you may ask? It might not surprise you to learn that, in this case at least, they performed better in cooler temperatures. That being said, scientists who spoke about the study with Time were keen to point out that the men’s decrease in performance wasn’t as dramatic as the overall improvement seen in female subjects. “When we start at low temperatures, the gender gap is huge in the math task,” Agne Kajackaite, an ethics and behavioral economics researcher at the Berlin Social Science Center, said. “As the temperature increases, women become better and better and better, and at some point, there’s no gender gap.”

Researchers said that more research is needed—after all, not every woman will perform better in the heat, nor will every man in cooler temperatures. The study didn’t find an upper limit on when the heat would start to negatively impact the females taking their test, but researchers say they hope to lengthen the experiment soon so they can include participants of different ages and backgrounds. “Temperature could affect not just the comfort, but the everyday performance of people,” Kajackaite said. “If you feel more comfortable in the office with your five sweaters, or without your sweater, it might also affect your performance, so you should take it seriously.”

Please note that this Scottsdale Real Estate Blog is for informational purposes and not intended to take the place of a licensed Scottsdale Real Estate Agent. The Szabo Group offers first-class real estate services to clients in the Scottsdale Greater Phoenix Metropolitan Area in the buying and selling of Luxury homes in Arizona. Award-winning Realtors and Re/MAX top producers and best real estate agent for Luxury Homes in Scottsdale, The Szabo group delivers experience, knowledge, dedication and proven results. Contact Joe Szabo at 480.688.2020, info@ScottsdaleRealEstateTeam.com or visit www.scottsdalerealestateteam.com to find out more about Scottsdale Homes for Sale and Estates for Sale in Scottsdale and to search the Scottsdale MLS for Scottsdale Home Listings.