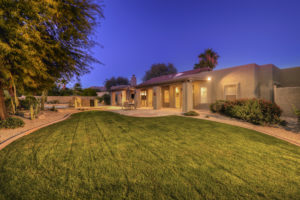 Mortgage rates have spiked 0.5 percent since the U.S. presidential election earlier this month. On a 30-year fixed loan of $300,000, this increases your monthly payment by $85.

If you were waiting to refinance, this is a wake up call, and if you plan to buy a home, it’s time to reevaluate your budget — because rates are unlikely to drop.

Let’s review what happened, and where we go from here.

Why rates are rising

Rates are tied to bonds, because bonds pay a rate of return to investors each year. If policymaking fuels inflation, a bond investor’s rate of return will be worth less in the future. Investors sell bonds on inflation fears, and rates rise when bond prices drop in a selloff.

This is exactly what has happened. Since the election, bond selling has led to the biggest bond losses in 26 years.

This dramatic rate spike might level off near-term, but don’t count on a reversal back to record lows.

Jeffrey Gundlach, one of the world’s most respected bond investors, thinks we’ve seen about 80 percent of a post election rate spike ahead of the Federal Reserve meeting on December 14.

This means rates could rise a bit more in the coming weeks, then the next catalyst will be Fed policy. The Fed has two main policy influences on rates.

First, they control an overnight bank-to-bank lending rate that serves as a benchmark for overall rate levels in the economy. In December 2015, they hiked this rate 0.25 percent after keeping it near zero since December 2008, when the financial crisis was at its worst.

There’s almost 100% probability of a rate hike at the Fed’s December 14 policy meeting. If the Fed does hike, this will reinforce inflationary expectations, driving higher rates. It will also increase rates on home equity line of credit (HELOC) second mortgages.

Second, the Fed has helped to keep rates low since January 2009 by buying bonds that directly impact mortgage rates — rates have dropped (or stayed low) on this Fed buying. Rising rates will hurt the Fed’s ability to buy enough bonds to continue holding rates down.

All of this means the Fed won’t be as rate-friendly as we’ve become accustomed to since 2008. This is why it’s very unlikely rates will drop from here, and may rise instead.

Nobody knows how much more until we get policy clarity from the first 100 days of a Trump administration, and the corresponding Fed reactions February 1, March 15, and May 3.

Implications for home buyers and owners

Below are some things you should be aware of as you evaluate your options in a rising rate environment. These predictions incorporate the latest available economic estimates (from November 16) from the Mortgage Bankers Association.